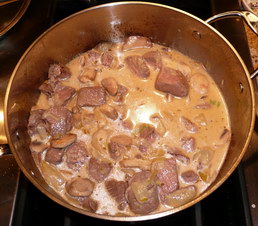 A Fast Sauté of Beef for Two!

A Fast Sauté of Beef for Two!

Amazing as wine is, I must say that when properly paired, it can be like the nectar of the gods — making whatever you’re having for dinner infinitely more enjoyable.

Recently, I was blessed with Julia Child’s cookbooks — her first book (in collaboration with two, French cooks), which is called, Mastering the Art of French Cooking, and a more recent addition, The Way to Cook.  Although I swear by a cookbook I bought at the flea market for 25¢ (The Doubleday Cookbook, by Jean Anderson and Elaine Hanna) and often consult The Joy of Cooking, it is without question that I have found the ultimate reference in Julia’s books.

Starting on page 195 of The Way to Cook, Julia talked me though the experience.  She didn’t dictate a recipe; anyone can find a recipe these days on the Internet.  No, she talked to me.  Okay, not like the risen-from-the-dead talked, but her narrative made the experience an absolute joy.  Here’s how she does it:

This is an almost complete main course with a certain jazzy style, something to keep in mind for a rather important and intimate occasion when you are in a hurry but want a good meal.  If you had time beforehand you could trim the meat and ready the vegetables.  But when you are an informal twosome, why not prepare the whole meal while having meaningful conversations and aperitifs together in the kitchen?

So, while I encourage your going out and buying her books, I do think having the recipe here can at least get you started.  I’ve put my variations in parenthesis.

If you follow Julia’s recipe, you’ll want to boil the onions for about a minute, pull them out and take the skin off.  Then, you’ll pierce the ends of each onion, so they’ll cook evenly.  If you do what I did, I just minced a medium onion, so that the onion would mix with the rest of the dish (and, because my wife doesn’t like whole onions).

Once you’ve prepared your onions, put them in a saucepan with the stock, herbs and salt.  Simmer for about 20 minutes.  It will begin to smell heavenly in the first five minutes.  You’ll need the juice and the onions later, at two different points. 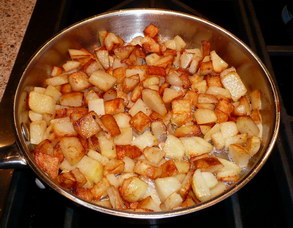 Really do this right.  Peel the potatoes, cut them in half, and then cut about ½ inch slivers, and then dice those.  You’ll end up with what looks like what some restaurants call hash browns when they’re serving cut-up potatoes.

In a 3qt frying pan, put 1 Tbs oil with 1 Tbs butter in and bring it to a high heat.  Make sure your potatoes are dry, and drop them in.  Saute them for about a minute, without messing with them.  Then, swirl the pan to move the potatoes around and flip them.  Don’t go crazy with the swirl, unless you’re really good at it, just move them around a bit.  Let them saute, occasionally swirling them.

If you do it Julia’s way, you’ll want to cut ¼ inch off the stems, make sure the caps are clean and then quarter them.  I’m a bit less industrious, so I buy a quart of sliced mushrooms.  Presentation is different, but I’d be hard-pressed to think the taste would be different.  At any rate, using another frying pan (the one you’ll finish the dish with), melt 2 Tbs butter and saute the mushrooms until they begin to brown.  Then, add the shallot or scallion and saute for about two more minutes.  Empty the pan into a bowl that you can keep warm (maybe over a burner on a super-low warm setting).

Well, I happen to love beef tenderloin.  I watch for the local supermarkets or butchers to put entire tenderloins on sale half-price.  Then, I buy two, cut them into fillets and vacuum pack them for my freezer to manage until I’m ready to make a dinner like this one.  Tenderloin is good for many meals, because it does not toughen while you cook it (unless you burn it, which I seriously suggest avoiding!).

Cut the tenderloin into 1½ inch chunks, and do your best to remove the fat.  Dry the meat on paper towels, so that it will saute properly.  Now, using that fry pan you used for the mushrooms, add 1 Tbs butter over moderately high heat until it almost begins smoking.  Then, drop the meat in and brown.  Keep moving the meat around to brown all sides.  But, don’t over-do it.  The meat needs to be rare, because it cooks a bit more at the end.  Remember, we don’t want that meat to toughen up!  Take the beef and put it with the mushrooms.  Leave them there for a bit, you’ll need them together in a few minutes.  Leave about a tablespoon of the fat in the fry pan to start the sauce (next).

If there’s not enough fat left over from sauteing the beef, just add a tablespoon of butter, and melt it.  Add the shallots or scallions and saute them for a moment or two (don’t burn them).  Then, pour the Vermouth, stock and all the juice from the onions you’ve had simmering (but not the onions just yet) into the pan.  Cook this mixture down well.  It should become a bit thicker as it reduces.  Once it’s reduced enough (what’s enough?  I reduced mine until the consistency was a bit thicker than water; but Julia says do it until it’s almost to a syrup), add the cream and work that around in the pan, making sure you get it well mixed in.

With the sauce simmering and thickened a bit, take the meat, mushrooms and the onions and combine it together in the pan.  Toss it up well, to make sure all the meat is coated.  While this is just barely simmering (don’t overcook the meat!), get those potatoes (almost forgot about those!) ready.  Bring them to a high heat, add another tablespoon of butter and crisp them a bit.  Then reduce the heat and toss in the parsley and tarragon. Mix them up and let the herbs green up a bit.  Now, they’re ready for the strew part.

Once the potatoes have become a bit crispy, strew (that’s what Julia says) them over the meat/mushrooms/onions in the other pan.

Serve this up at once!  We like to use pasta bowls, as this is a single serving meal.  You could always extend this meal by adding side items like asparagus tips or a side salad.  But, we liked it all on its own.

Did you think I forgot the wine?  Well, in fact I opened that up when I started cooking!  It went fabulously,  before, during and after the dinner!

On another occasion, with a fellow WineChump inductee, I paired a very nice merlot as well: