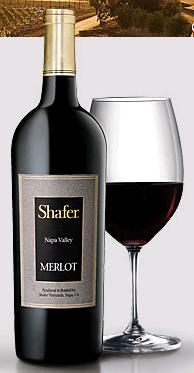 I know I made a mistake tonight.  As this winechump clears out his wine cave, relieving himself of wine that might have gone a bit off after its time, I found a Shafer Merlot 2001.  Typically, I Google my wines to figure out if it’s time to drink them, or simply use them to cook some killer spaghetti sauce.  Thinking about a recently opened Coppola Blue Diamond Merlot from 1999 where I found that it hadn’t survived the years and that I should have opened it years earlier, I grabbed the Shafer and uncorked it.  So, the mistake I made was opening it!  Then, again,  it was quite good.  No, really it was great!

“One of California’s most popular luxury priced Merlots is also one of the state’s best.”
– Richard Nalley, Forbes

To deliver a wine loaded with color, extract and concentration, Shafer vineyard crews pass through the vine rows a number of times as harvest approaches cutting away less-ripe and under-developed fruit. This allows the vitality of the vine to focus on the remaining top-quality fruit. With added hang time, sugars and flavors increase markedly.

While this wine is officially designated with the Napa Valley appellation, its fruit is sourced from within just a three mile radius in the Valley’s cooler southern end. Half of our fruit for our Merlot comes from a hilly Shafer-owned vineyard we’ve informally dubbed, “School Bus,” located about a quarter mile due south of Stags Leap District. The remainder is cultivated within Stags Leap District by growers we’ve worked with closely for years.

Merlot is a finicky grape – a bit too much rain, a touch of frost early in the season – will easily result in less than ideal fruit. Early on each season our vineyard team culls any weaker fruit leaving only the best-of-the-best on the vine, ensuring that the wine exhibits lush, ripe, mouthfilling flavors that are true to varietal character.

Winemaker’s Notes
“The 2007 Merlot is a richly aromatic, elegant wine that comes with layer upon juicy layer of lush red and black jam fruits – cherry, plum, currant – and dark chocolate, black tea, smoke and spice. The tannins are ripe and smooth with a finish that takes its time letting you go,” says Shafer winemaker, Elias Fernandez.