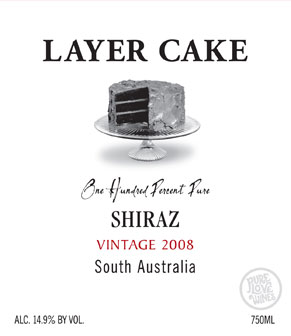 Notes from the producer

Vineyard Notes: Layer Cake Shiraz is produced in South Australia which is arguably one of the top shiraz-growing regions of the world.  Within SA, the McLaren Vale is the most diverse and historic sub-region with vines dating back to the 1830’s.  The microclimates within McLaren Vale are what give Layer Cake Shiraz its complexity.  For our Shiraz, we pull from vineyards all over McLaren Vale; from the full-clustered, sandy soiled blocks on the sea coast of Gulf St. Vincent, to the Terra Rosa based, tiny-berried wind- blown hills across the Vale.  The vineyards are all within a few miles of each other, yet give us a broad array of flavors to blend into a complete wine.  Each year we pull a small amount of fruit
from tiny vineyards in Padthaway and Wrattanbully for added layers; combined they represent less than 10% of the blend.

Climate: McLaren Vale, like all the great red wine regions of the world, is bordered on one side by water and the other by a mountain range; Gulf St. Vincent and the Adelaide hills in this case.  Counter intuitively, The Vale is warmer by the sea as the warm air gets trapped in pockets of the undulating hills; these blocks have deeper soils and produce larger, fuller clusters with big mouth filling fruit.  The hillsides on the far side of The Vale have shallower soils and get blasted by high winds. The vines react by producing tiny-berries with thick skins, therefore wines with big structure.  Overall, the temperature is moderate, with cool nights and warm days.

Winemaker Notes: An eye for detail and relentless perfectionism coupled with an insatiable desire to produce the finest wine is winemaker Jayson Woodbridge’s gift.  Non-interventionist winemaking practices are used:

Tasting Notes: Dark, dense and creamy, complex aromas of black plum, Bing cherry, blackberry and pepper merge with licorice, tobacco, mocha and dark chocolate.  This is one inky Shiraz; an explosion of dark, super ripe, wild blackberry, with a touch of cigar box finishing with a mélange of exotic spices. A pure fruit bomb…complete from attack through a long, lingering finish. Chefs will save this cake for themselves…