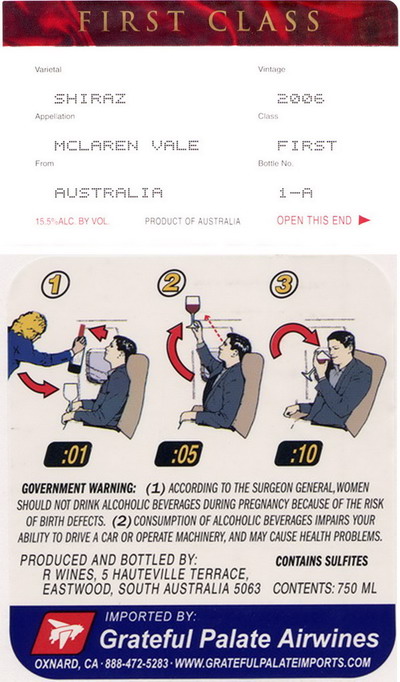 The Grateful Palate went into receivership a couple of years ago.  While in business, they sourced some excellent wines that you can still find if you look hard enough.  “R” wine labels including Marquis Philips (which we’ve listed on WineChump) and other distinctive wines such as First Class and Boarding Pass were some great wines at fairly good prices.  The degree to which R wines spent time on their labeling reveals their pride in the product.  Share with us a look back at R wines, and if you can, pick up some before they’re all gone.

The following text was excerpted from the Wayback Internet Archive (web.archive.org):

Welcome to the world of Grateful Palate Imports. In 1997 I bet my life savings on red: I invested every penny I had in a partial container of Australian Shiraz from a dozen and a half producers. At that time there was virtually no market for world-class, ultra-premium Australian Shiraz anywhere in the world. But my philosophy was simple then and remains the same today: I only buy wines I’d be happy to drink if they do not sell.

Over the years, we have assembled the world’s finest portfolio of Australian Shiraz, including producers such as Chris Ringland, Trevor Jones, Rick Burge, Marquis Philips, Noon, Kay Brothers, Greenock Creek and many more that you can explore through our web site. We focus on South Australian Shiraz, primarily from the Barossa Valley, McLaren Vale and Padthaway, but also great Shiraz from regions like Heathcote, and also other wines like old vine Grenache, Cabernet, and Riesling. In 2007 we introduced our first wines from California: Napa Cabernet and Merlot and old-vine Mourvedre and Carignan.

We believe that the context for great wine is great food. While the wines of Australia are well known, the food (and cocktail scene) is not as well known. Here are some of our favorites: Anise in Brisbane, Gerald’s and Der Raum in Melbourne, The Victory Hotel in McLaren Vale, Bailycroft Cheese in the Barossa, Jade View Inn in Adelaide, where you’ll find some of the freshest, most honest, innovative pleasure giving food on the planet.

To create and discover distinct, full flavored delicious wines from Australia and around the world that are always a great value, unbeatably consistent, and food worthy. Invent a portfolio of wines unlike any the world has seen—one that is solid, dependable and aggressively growing. To build a company that delivers pleasure, profits & bacon for all. Oh, and one more thing: WE LIVE TO SERVE!

I was schlepping around the Internet, and I found the 2007 from a discount wine company.  Along with a few bottles of La Luchador (another of Chris Ringland’s “R” Wines), I was able to pick up two of the 2007 vintage of First Class for about $20.  Pleased with my find, I tried them for New Year’s Eve 2014.  Well, seven years has done this wine some real good.   Excellent.  Buy them up, because they aren’t going to be around for long!

Found more of these online, and picked up two.  They’ve aged well.  The price is still around $20, so if you can find them, buy all you can get!

I discovered one of these bottles hiding in my wine cave, and I was sure it had gone past its prime.  Well, I was wrong.  I luxuriated in it for hours and finished it with grilled Kutztown Ring Bologna topped with roquefort cheese on crostini.

If you have one of these 2007 First Class Shiraz (or can find any left in the world), grab it and open it.  It was fantastic!

Any cookies that may not be particularly necessary for the website to function and is used specifically to collect user personal data via analytics, ads, other embedded contents are termed as non-necessary cookies. It is mandatory to procure user consent prior to running these cookies on your website.