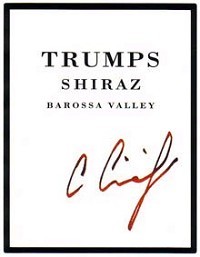 Karlsburg Winery was founded in 1973 by Czech immigrant Karl Cimicky, who in addition to being a bit eccentric, was also a highly skilled winemaker

The estate features an incredible building that was built by Cimicky himself and has lovely formal gardens that are always manicured. Karl’s son Charles took over the family business and renamed it for himself, hence the name on the bottle now. In the early 90s Charles began to take a keen interest in winemaking and the good wines started turning into awesome wines. Charles Cimicky produces rich, voluptuous, generous wines with superb balance. Now in his late thirties Charles Cimicky is one of the most quality-driven, meticulous winemakers in South Australia.

Charles Cimicky is fastidious. The winery is completely air-conditioned and individually temperature-controlled tanks are employed in the making of all Cimicky wines. Updated technology includes the unse of a membrane press and rotary fermenters. The Cimickys also have their own bottling and packaging line which is a rarity in a winery of this size.

Charles Cimicky winery and vineyards are located one kilometer along the picturesque hermann Thumm Drive in Lyndoch, on the very floor of the Valley, surrounded by the beautiful Barossa Ranges. Apart from minor drip irrigation in January and February, the entire 32 hectares of vines are dry grown, cover-cropped and organically fertilized. The fruit is aged only in top quality oak which is apparent in the finegrained tannins evident in all of their premium wines.

The winery features a castellated building surrounded by a formal garden, quite spectatular and well worth a visit

The Trumps range is named after the custom of a small group of Barossa pioneers whose habit was to seek the cellar retreat for the twin pleasures of claret and cards. In the cool depths of this refuge they would while away a hot summer’s day playing Euchre and drinking red wine, well away from the prying eyes of more puritanical souls. Originally the wines were marketed under the Karlsburg label.

“Quiet achiever in the wine industry, Charles Cimicky, lead last week’s Barossa Wine Show with four trophies. The Lyndoch winemaker took out awards for best wine – small producer, best Shiraz, most outstanding Barossa red wine and most outstanding Barossa wine. It was the 2006 Trumps Shiraz which impressed the judges, and Mr Cimicky was humbled by his win. He lead a strong field of Shiraz entries, which the judges described as “very strong” wines where the top exhibits were set apart by “purity, focus and balance”. The 2006 Trumps offers pungent aromas of blackberries, raspberries and plums that are lifted by charry oak and a background of smoked meats. Toasty, vanilla and treacle-like oak is a match for its vibrant flavours, the finish is refined yet full with definite white pepper spice and rich ripe berries linger long after the wine is gone. This year’s accolades adds to previous succes from 1997 to 2006 which include The Barossa Wine Grape Council Trophy in 1998 and 1999″ -Barossa & Light Herald